Crossing the border did not take long, although the customs officer was curios about circumstances of Russian meeting Argentinian on an American bus on his way to Canada.

We decided not to go too far since our goal destination was Canadian part of the Glacier National Park – Waterton lakes National Park.

The first photo in the background of the Waterton lake – main lake of that park. 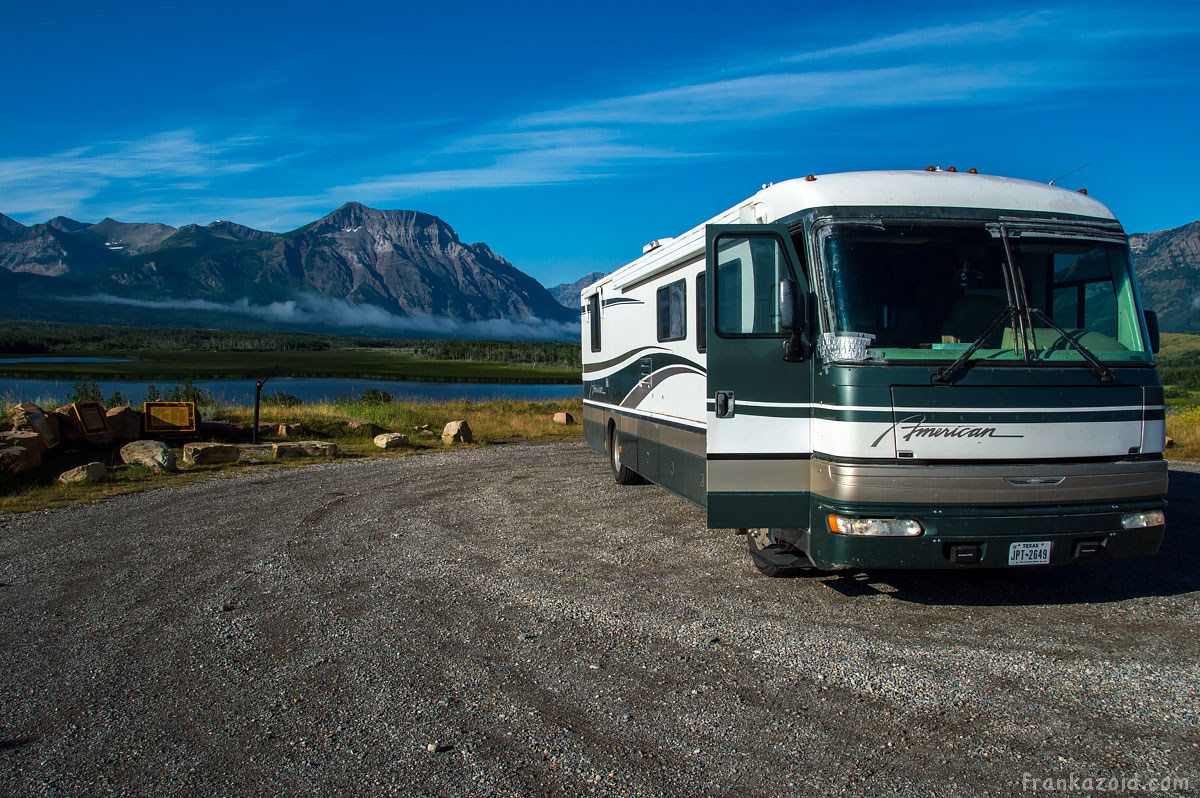 Nicely situated on a hill hotel – one of the main attractions of the town. 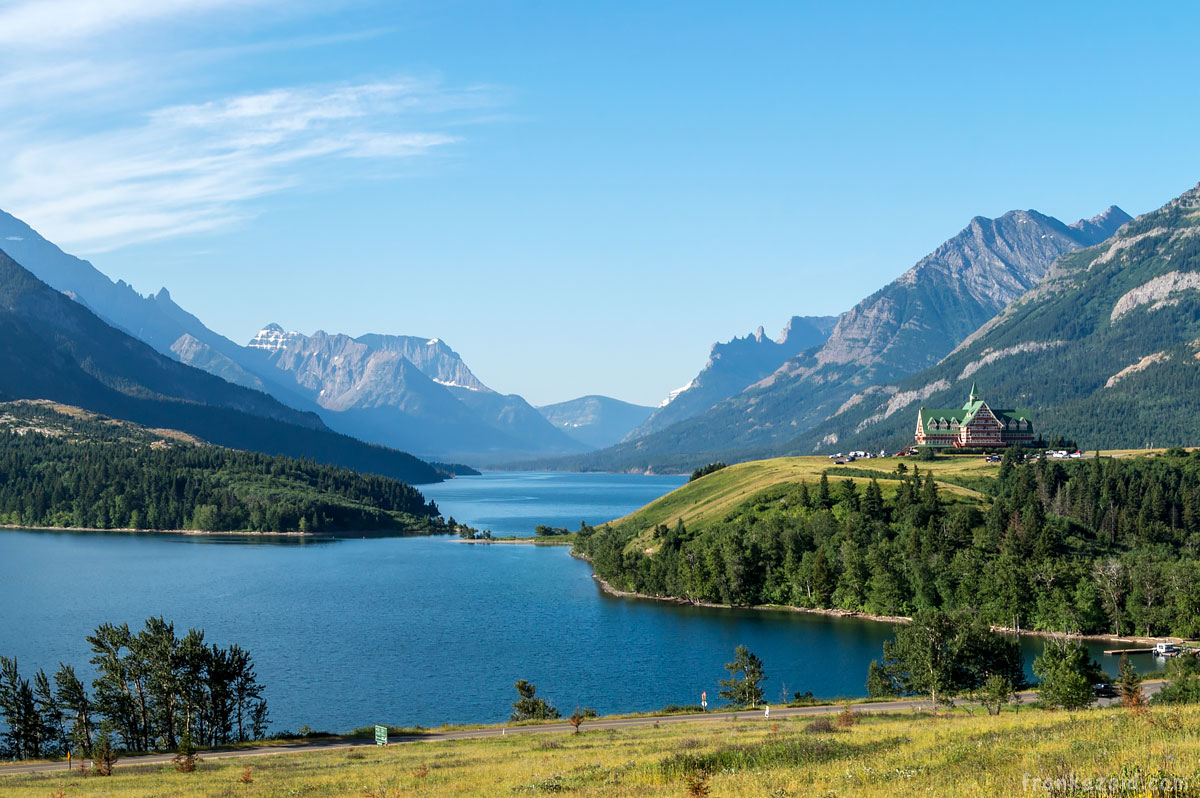 While we were looking for parking lot, we ran into a bear, calmly eating berries. At first we took shots from the ground, but at some point we got into the bus – he came very close. However, he did not show any interest in humans. 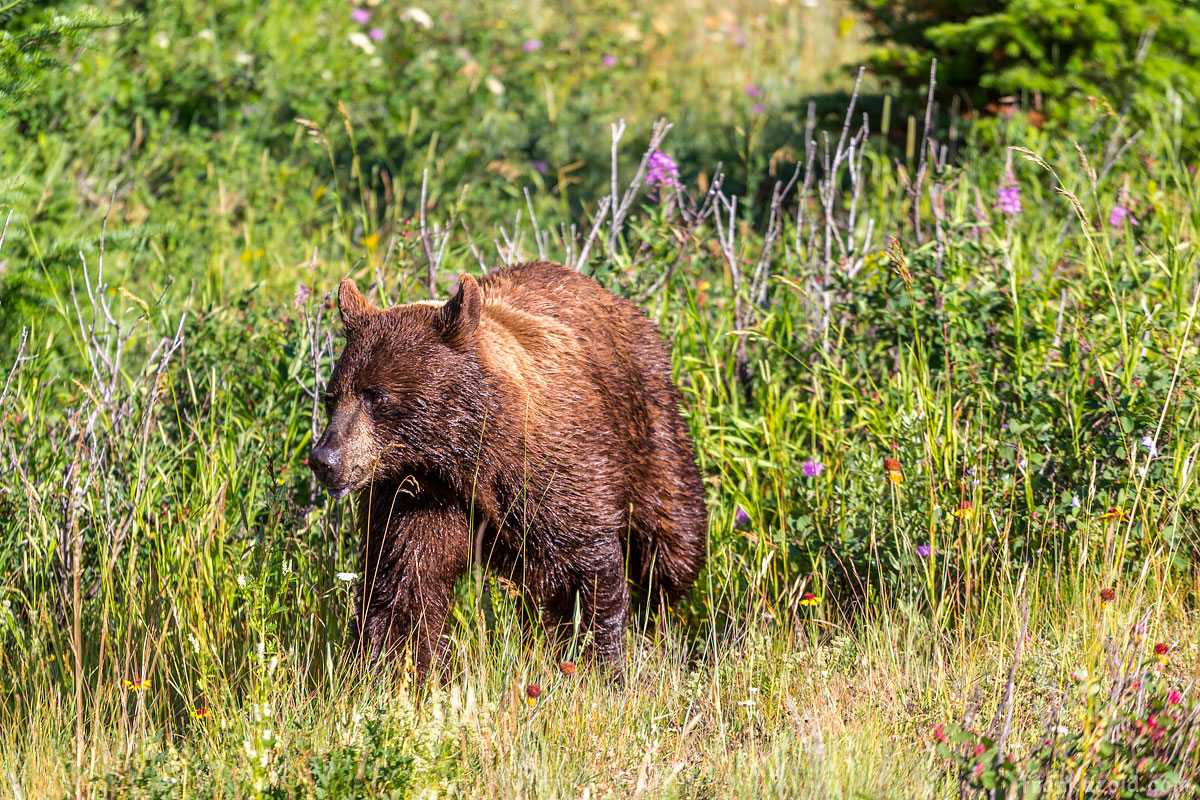 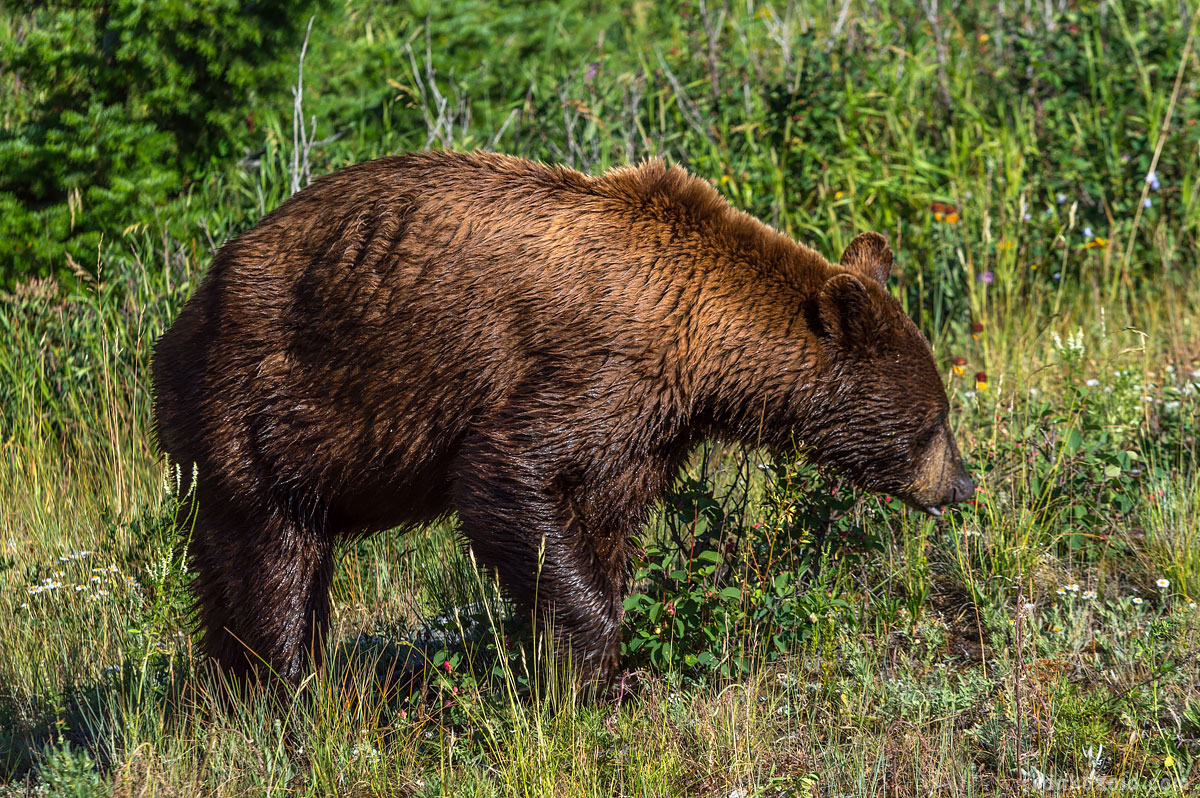 We celebrated reaching of one of the key points (well, Canada) by staying overnight in a camping in the city, from which we made a couple of trips to the neighboring lakes and mountains.

Lake Berta seemed close, but still it turned out 5 hours and 40 minutes and 13 miles. I have to say that here I jumped in to almost every lake, despite the very cold water. As the time passes we are hiking more and more actively, so I was warmed up (and sweated) to the right point to throw myself into the water without hesitation. 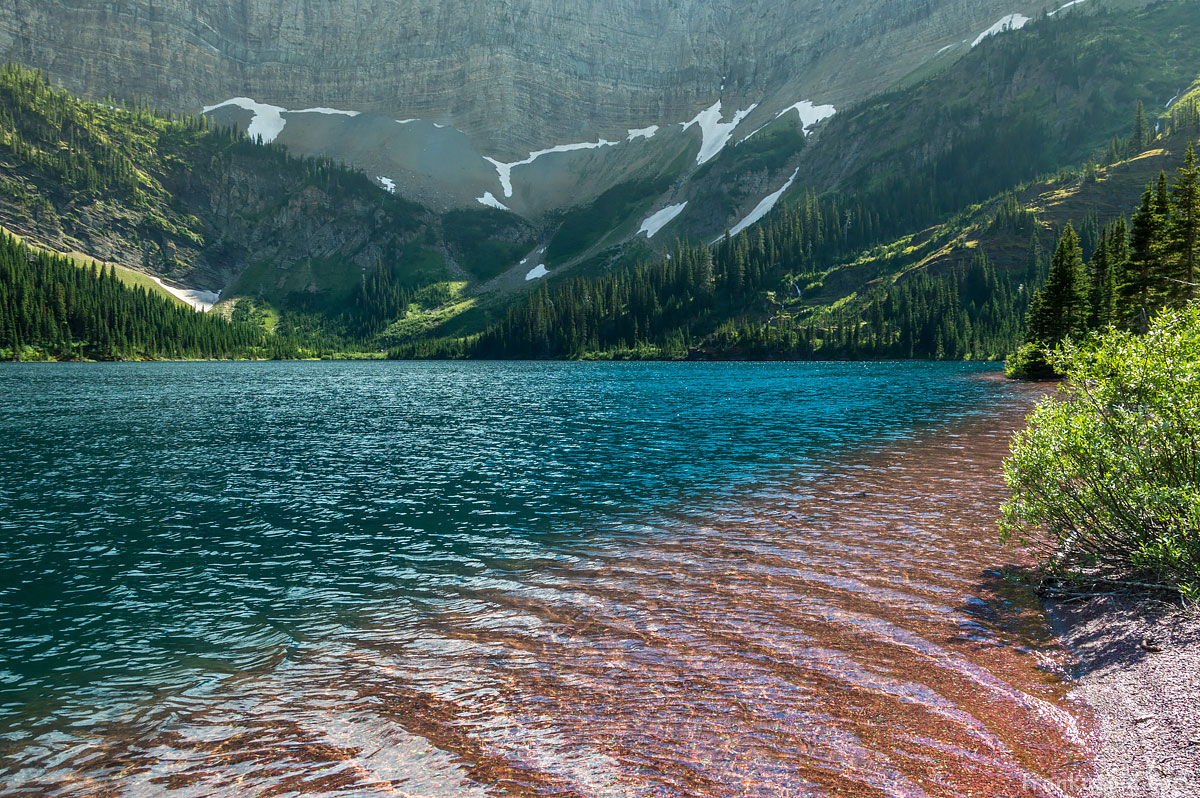 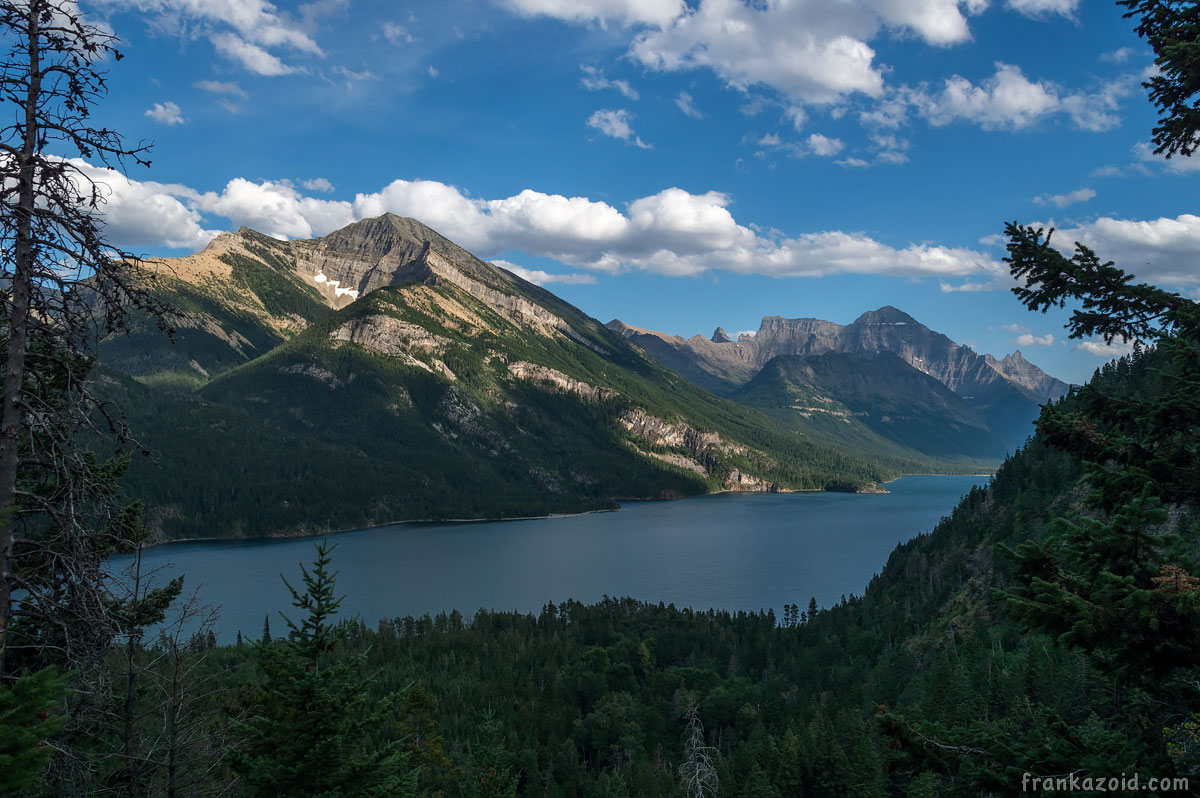 It seems that the distance / time becomes quite standard for us – 5.5 hours and 12.5 miles along the trail to Carthew-Alderson lakes. 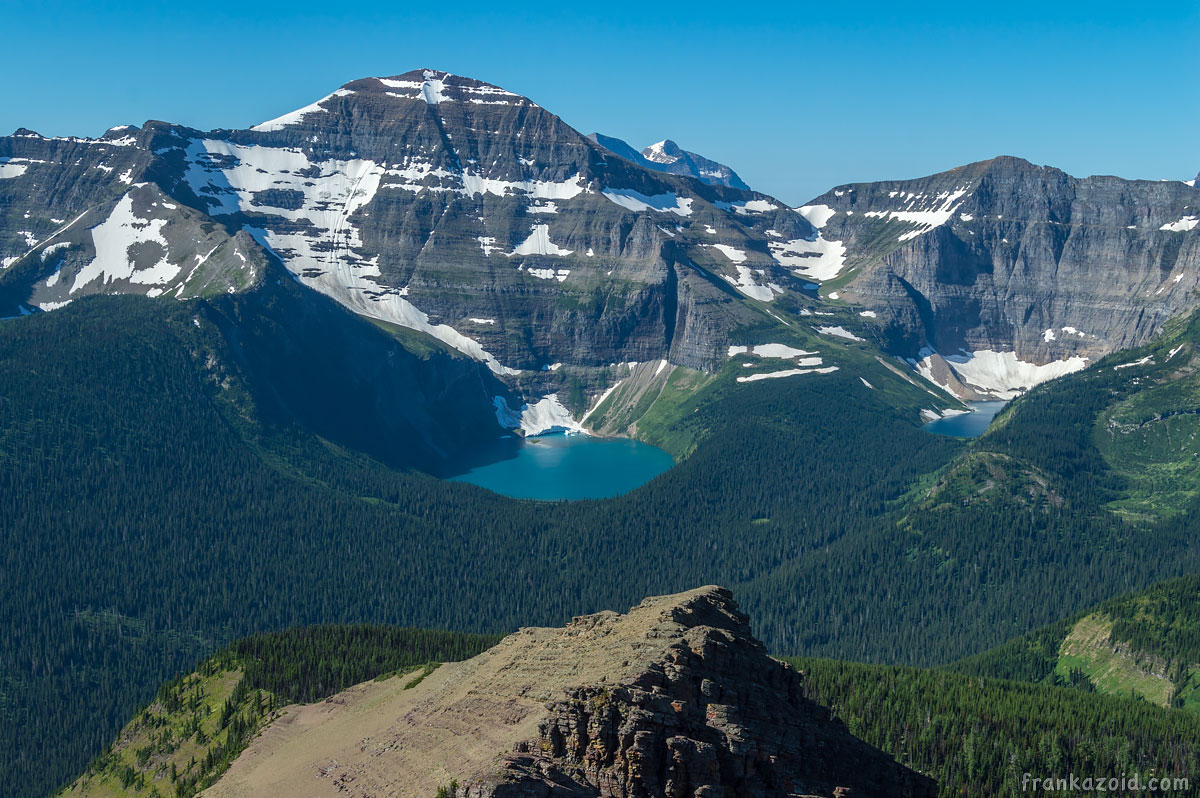 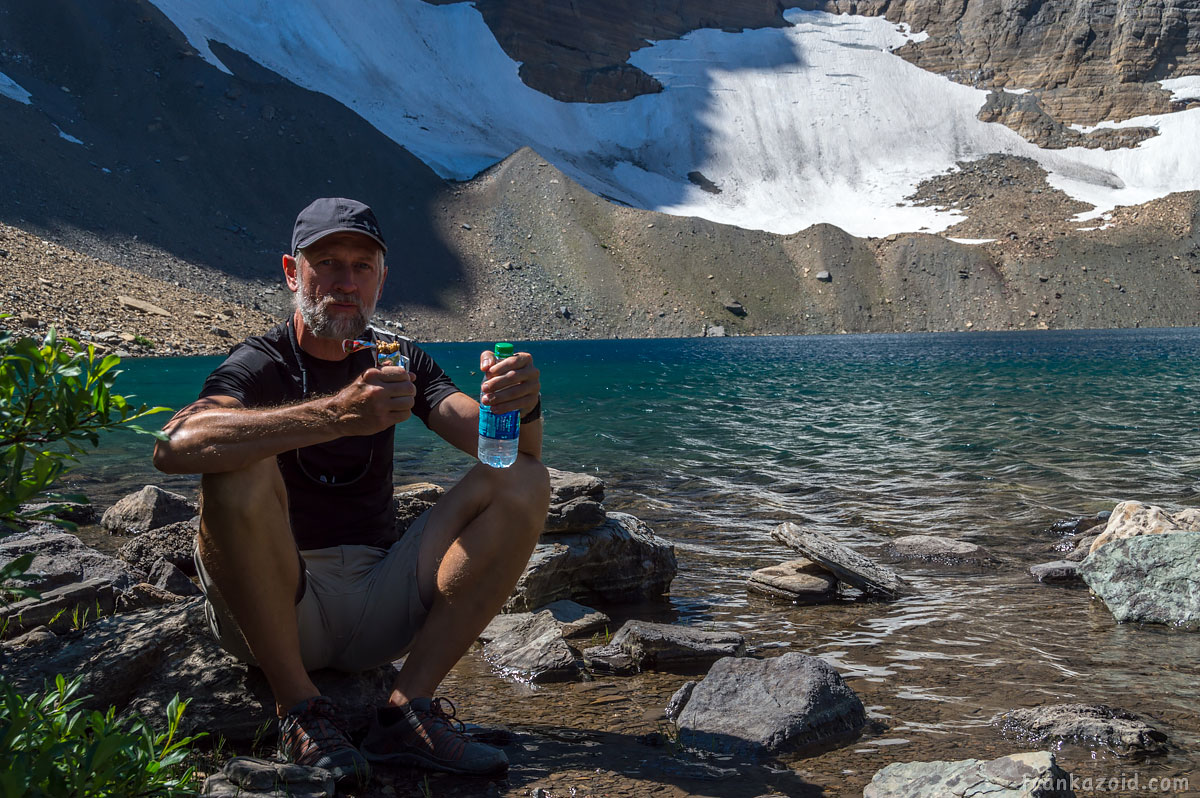 The views are beautiful, but either the impressions are dulled already from the long trip, but it felt less colorful somehow. The park is the same, but in Montana we enjoyed every hike a lot. Trails here often go along the slope among the stones, you have to look more under your feet than around. We decided to get to the Cameron Lake on a motorhome 🙂 and although we had difficulties getting to the parking spot (it’s very tight for the size), but we liked the lake – it’s big and quiet. 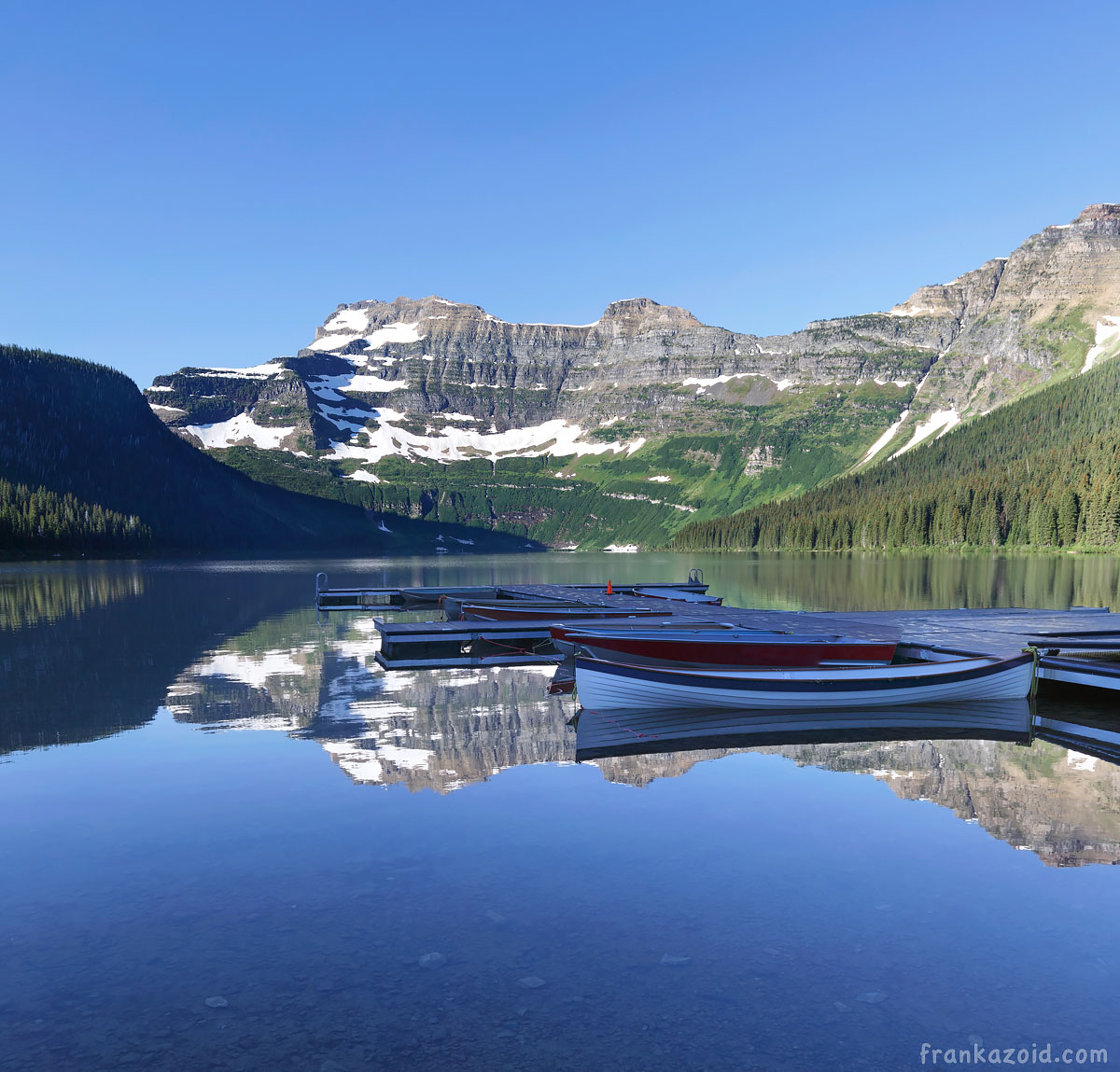 Having decided that it was time to move on, we went to meet the sunset / dawn on Two Jack lake in Banff National Park. Here, the smoke from forest fires in British Columbia has already started to get into our way, but it was still tolerable. 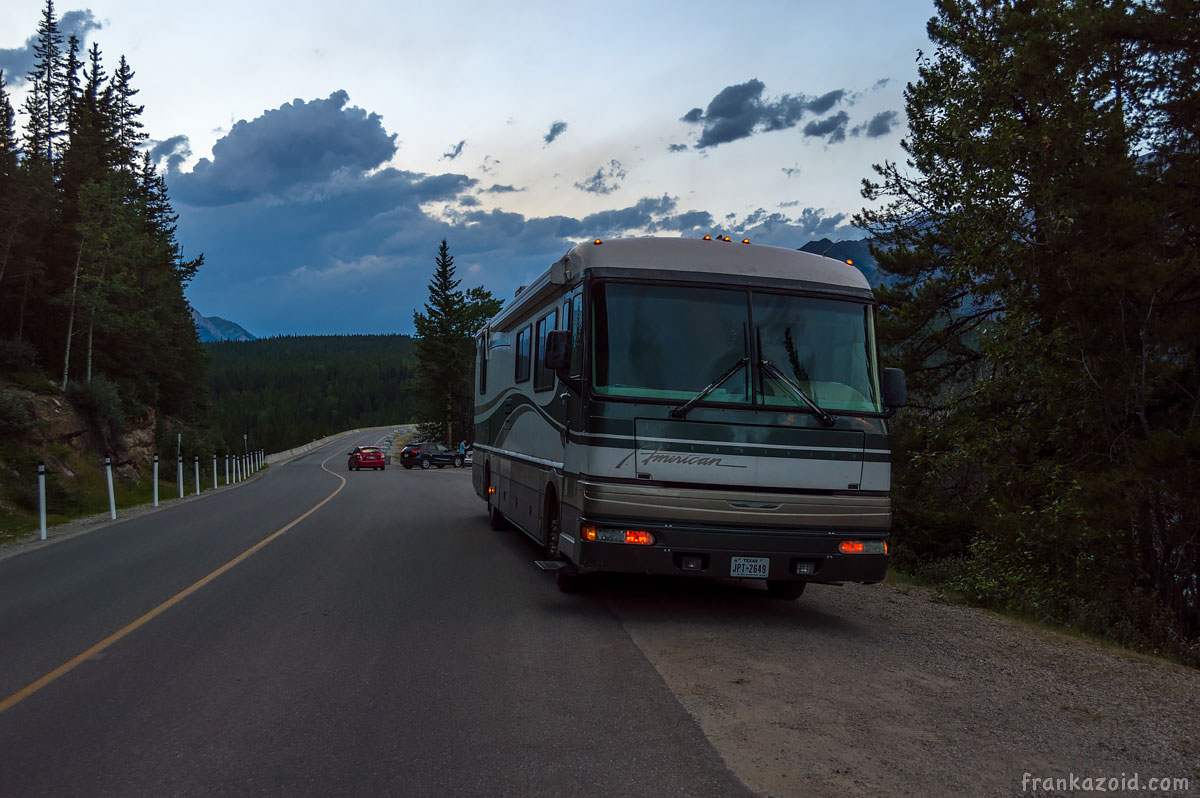 As I recall we spent the night right there in the parking lot, we got up early and pretended we just got there. And I was not even too lazy to get the kayak out for pictures and actually paddled around the lake to the dam. 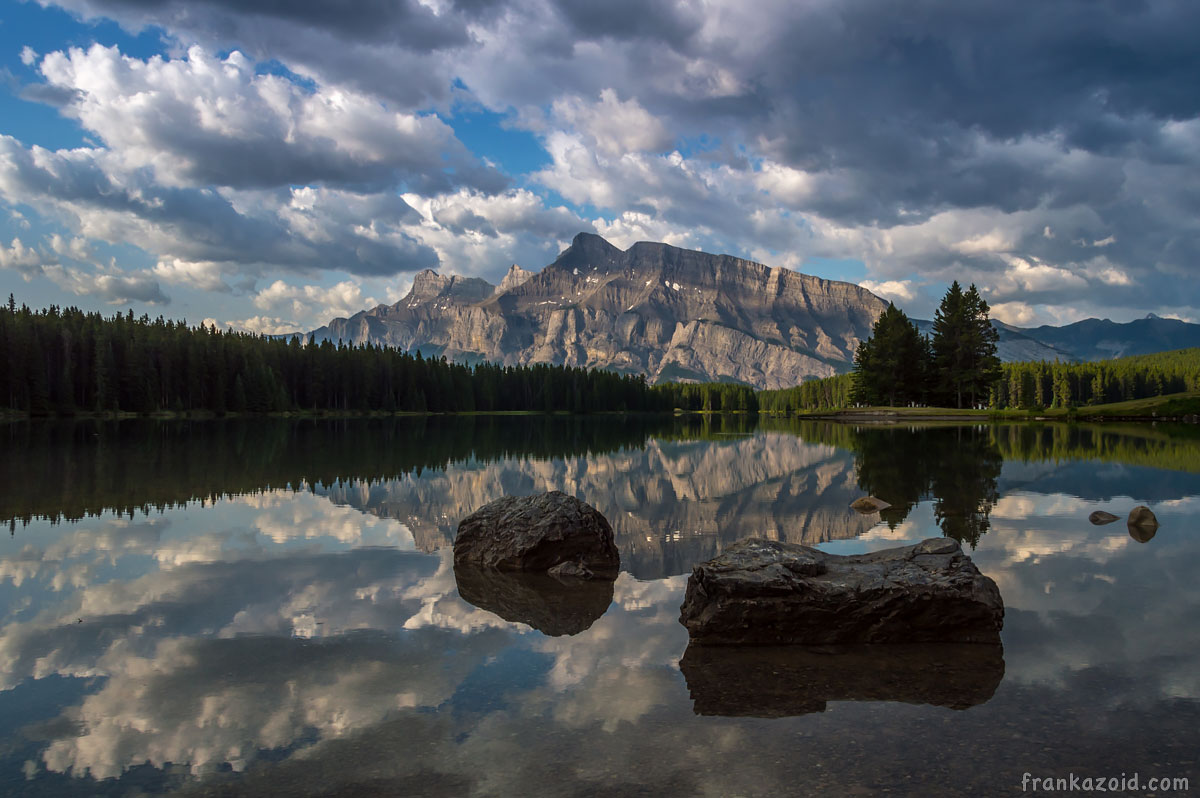 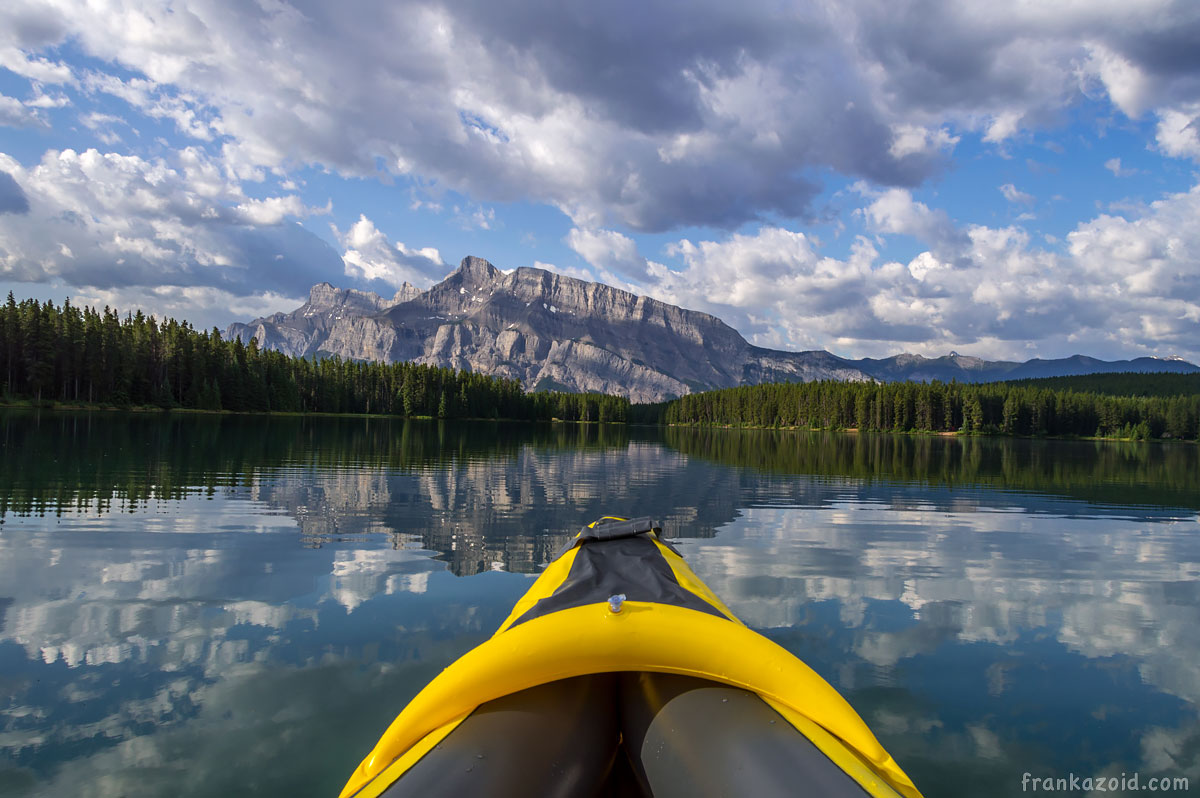 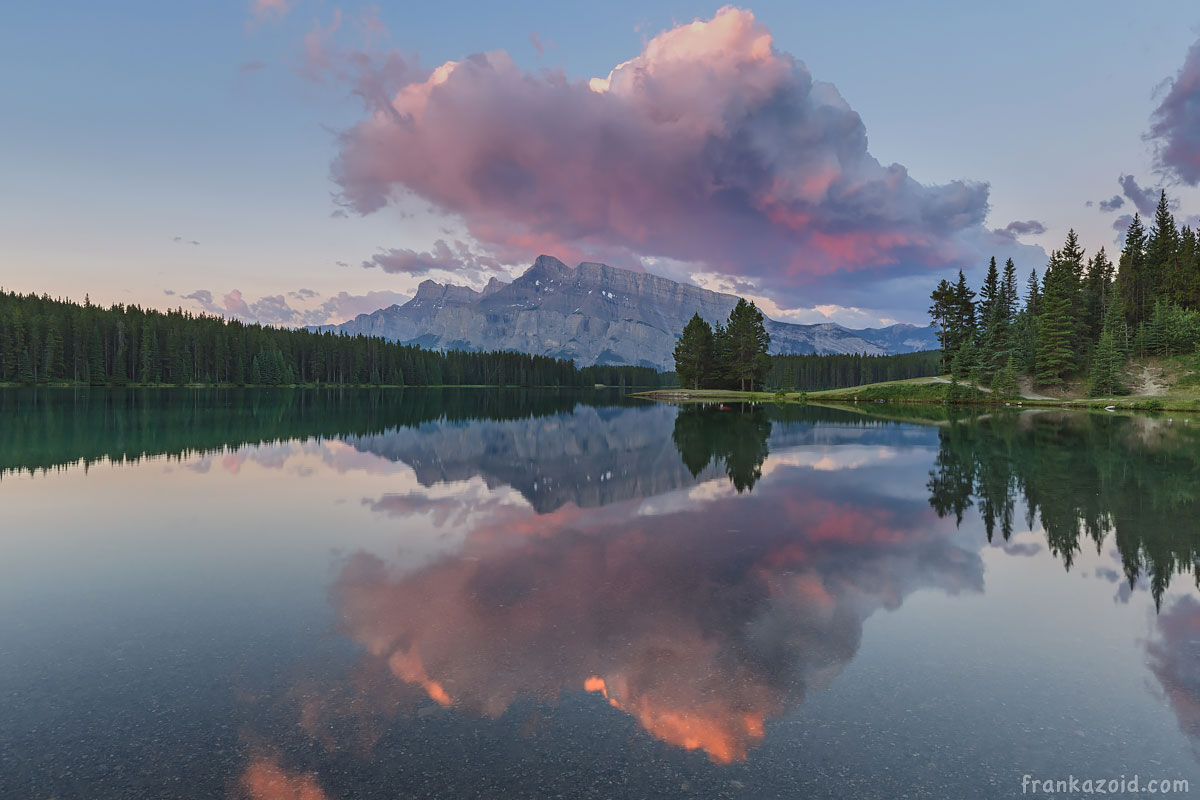 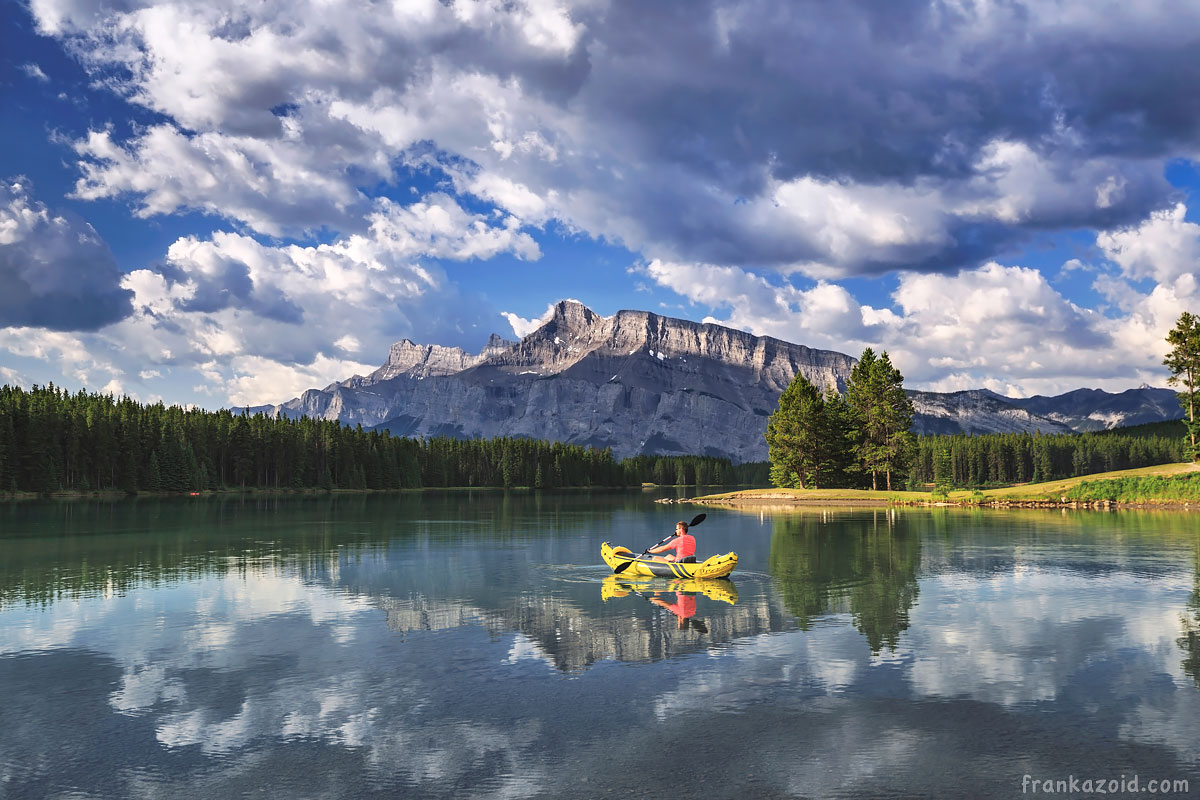 We did not go to the city itself, as having a large fuel tank is convenient – we don’t need to refuel it constantly. Just as a reminder – the tank is 500L, and the average mileage was about 9mpg.

The next point was Lake Louise, but we saw a sign on Kootenay park along the way and could not resist to check it out. The further we drove (by the way, hi, British Columbia, another place I’ve never been to!), the more smoke there was, so we turned around and took a short walk of 5km to the Marble Canyon. 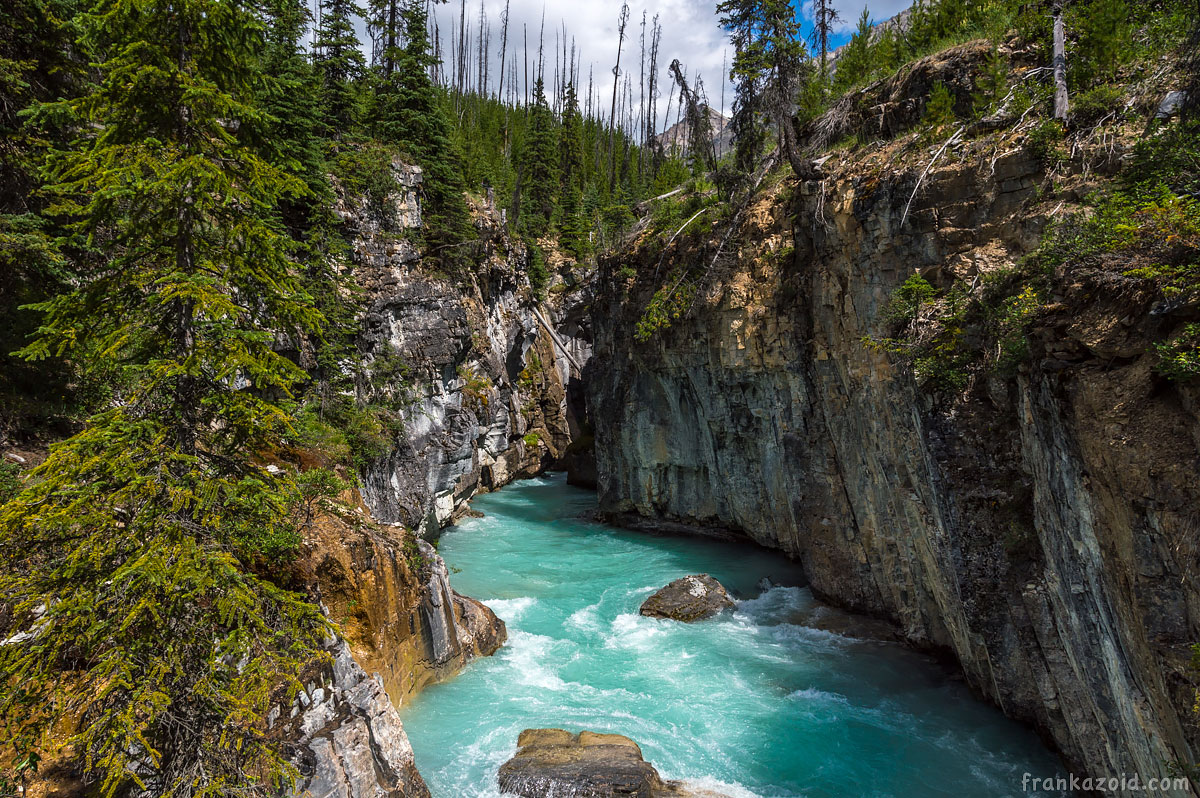 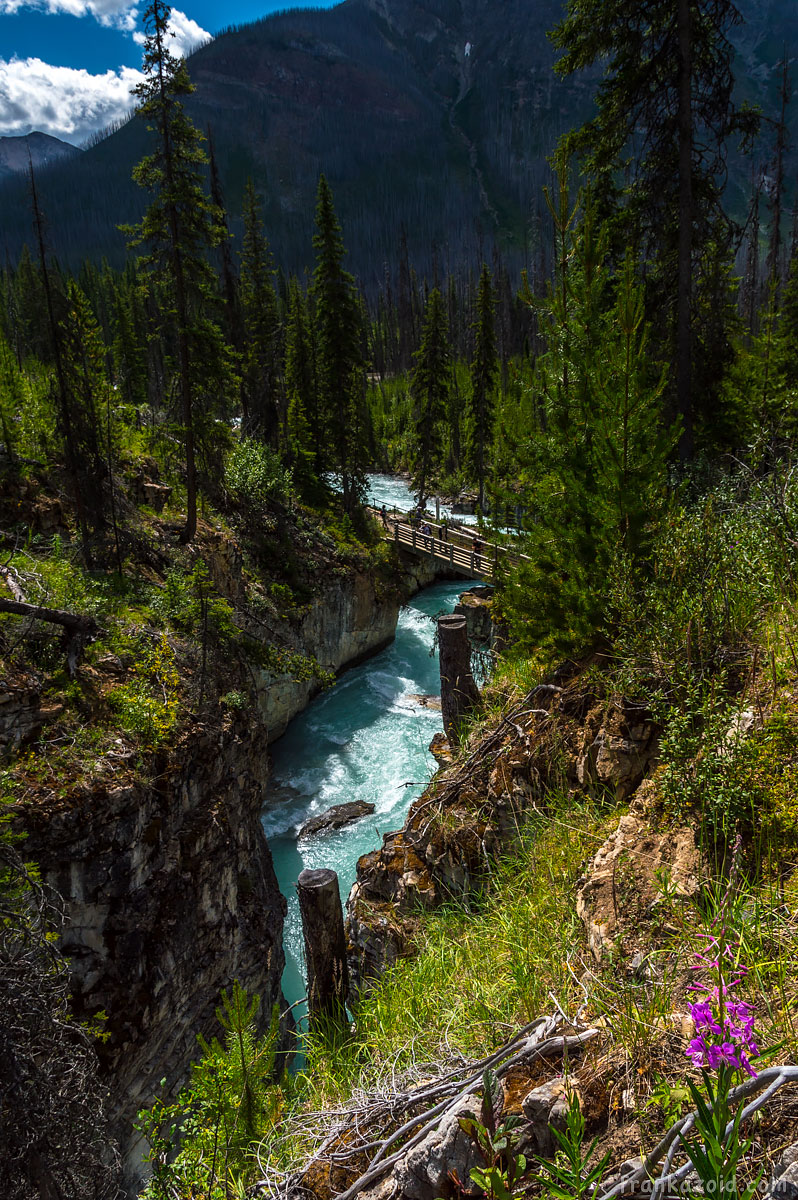 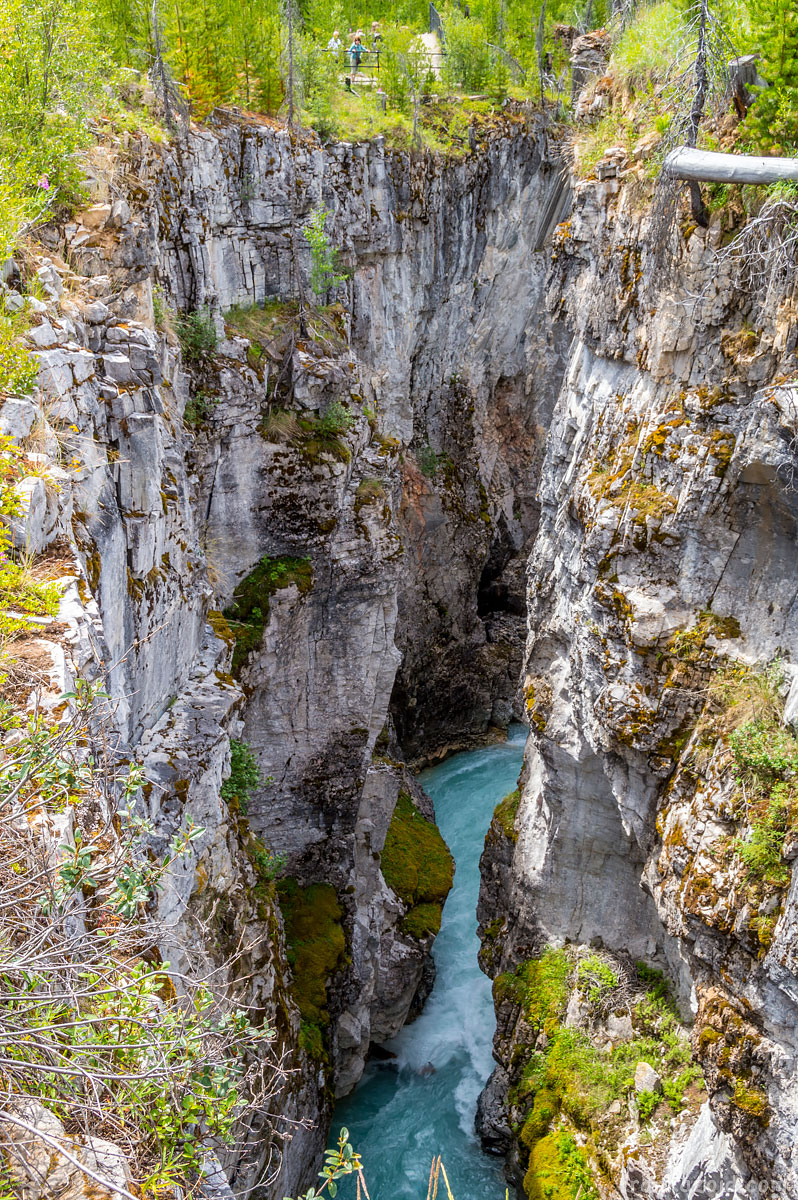 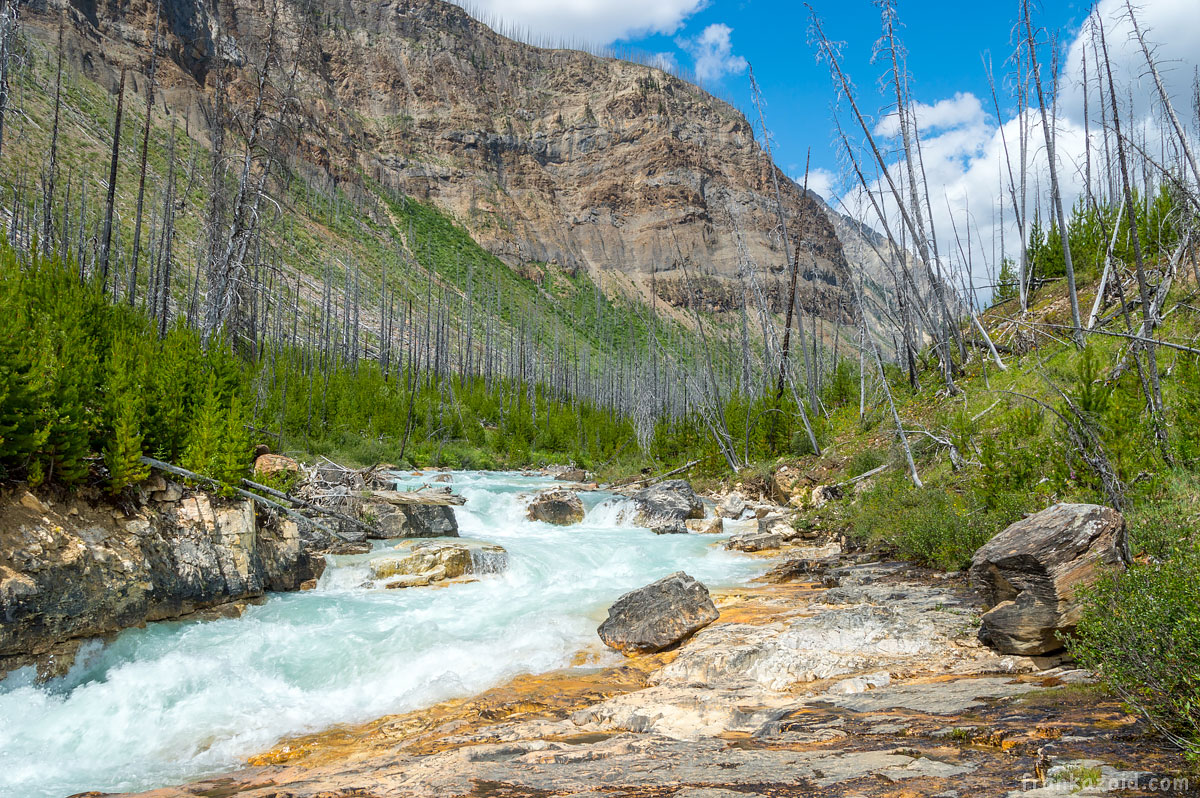 Honestly, we tried to see Lake Louise for two days – there were a couple of gaps in the smoke, but in general, the visibility was really limited: ( You can shoot animals closely but not su much for landscapes. 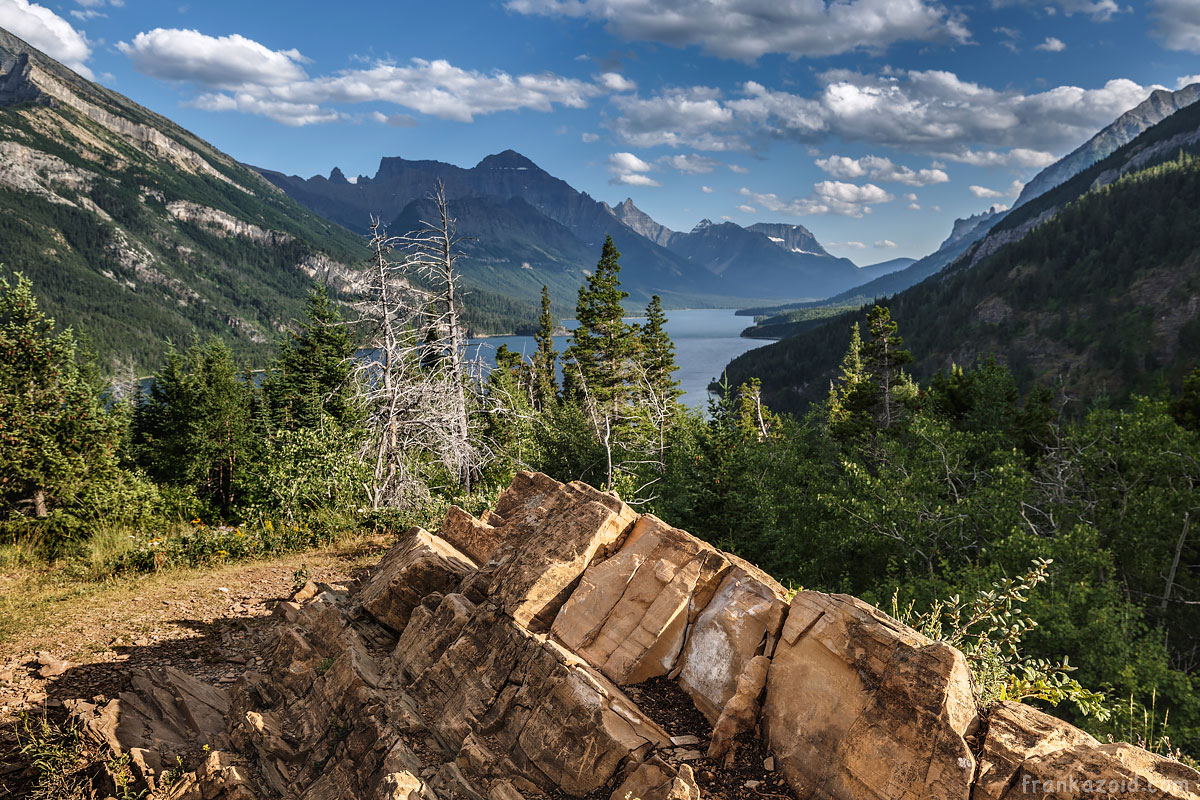 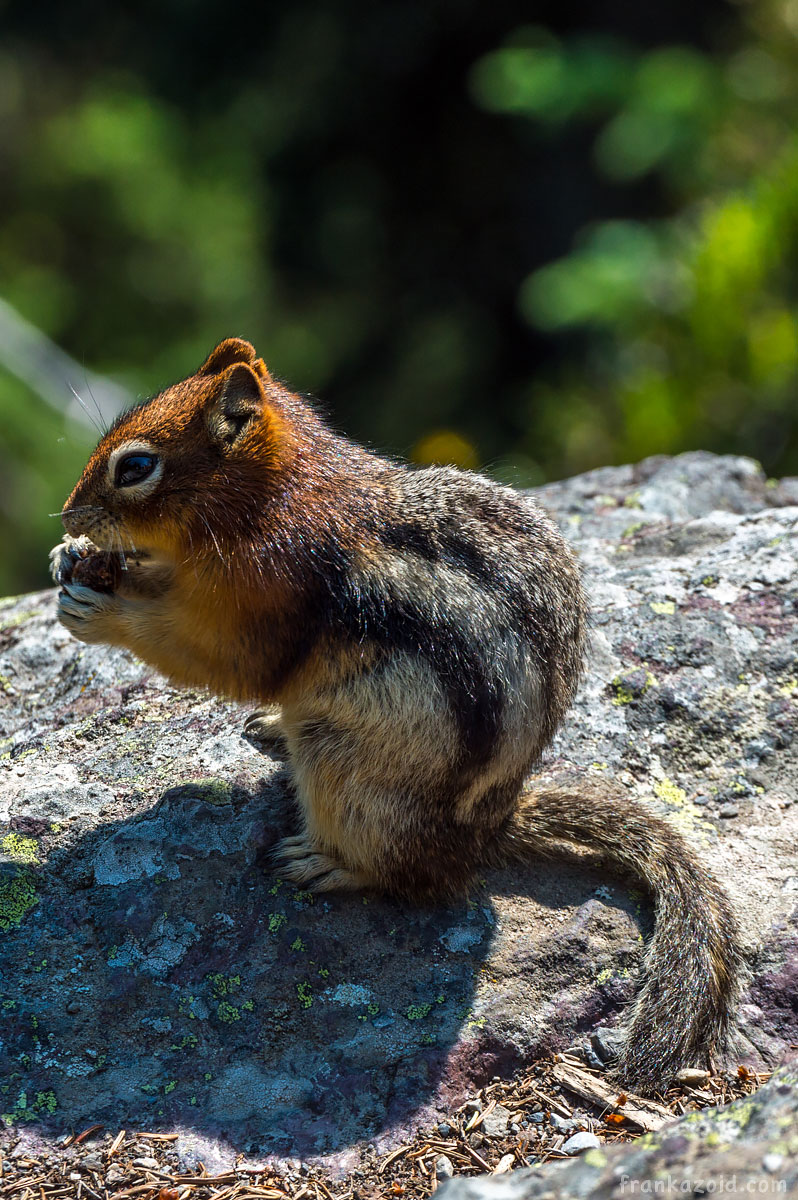 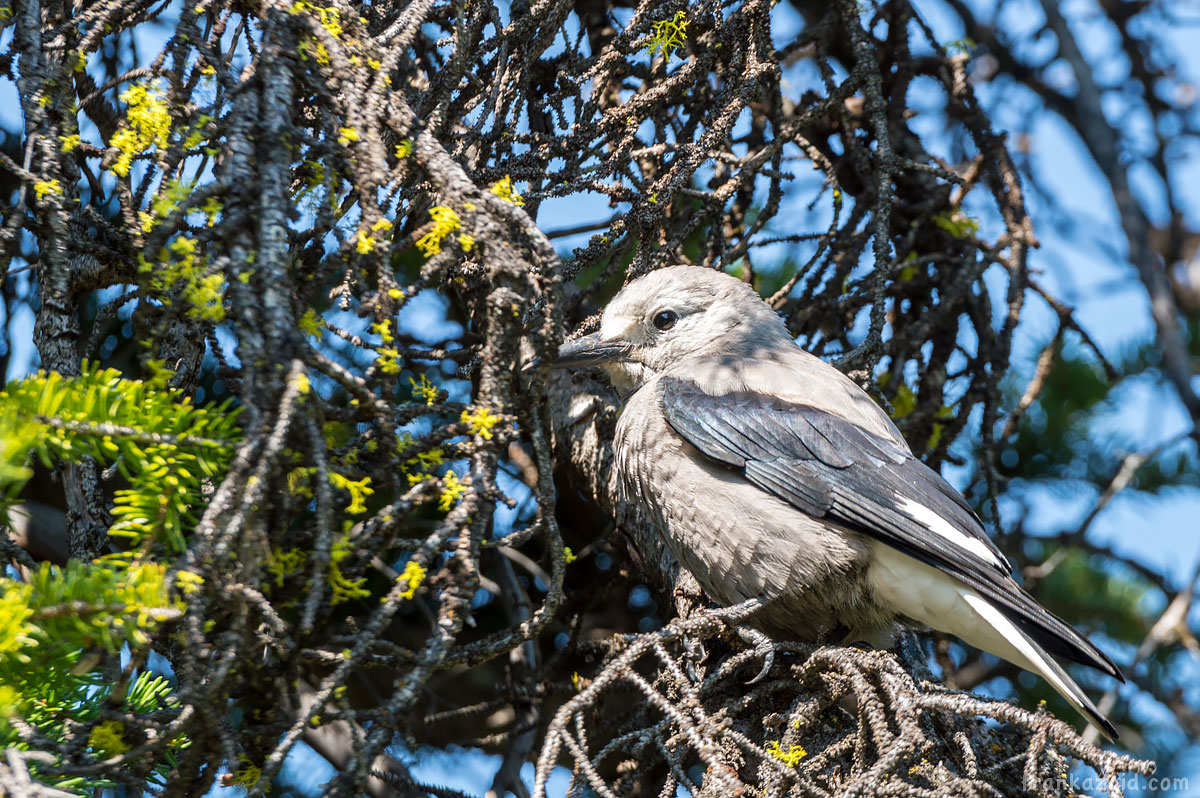 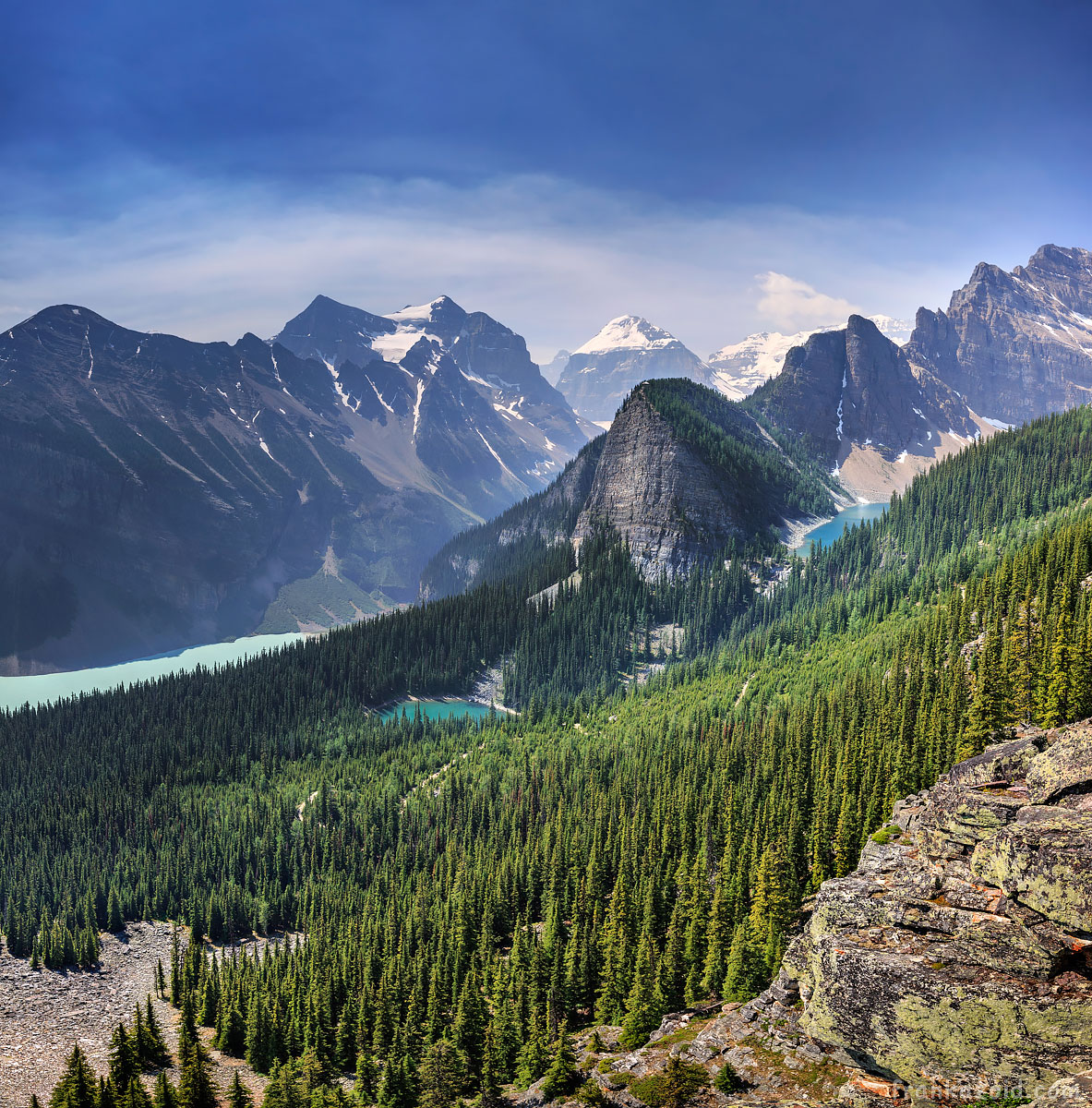 Looking for beautiful placed around we went to Mirror lake and lake Agnes, but they turned out to be just lakes in the forest 🙂 You can see them in panoramas above, by the way. Another 6 miles of mountain trails.

We reached the Moraine lake as well, from where we went to the Centinel pass, 7.5 miles of pleasant trails, it’s a pity, again, that all shots are in smoke. 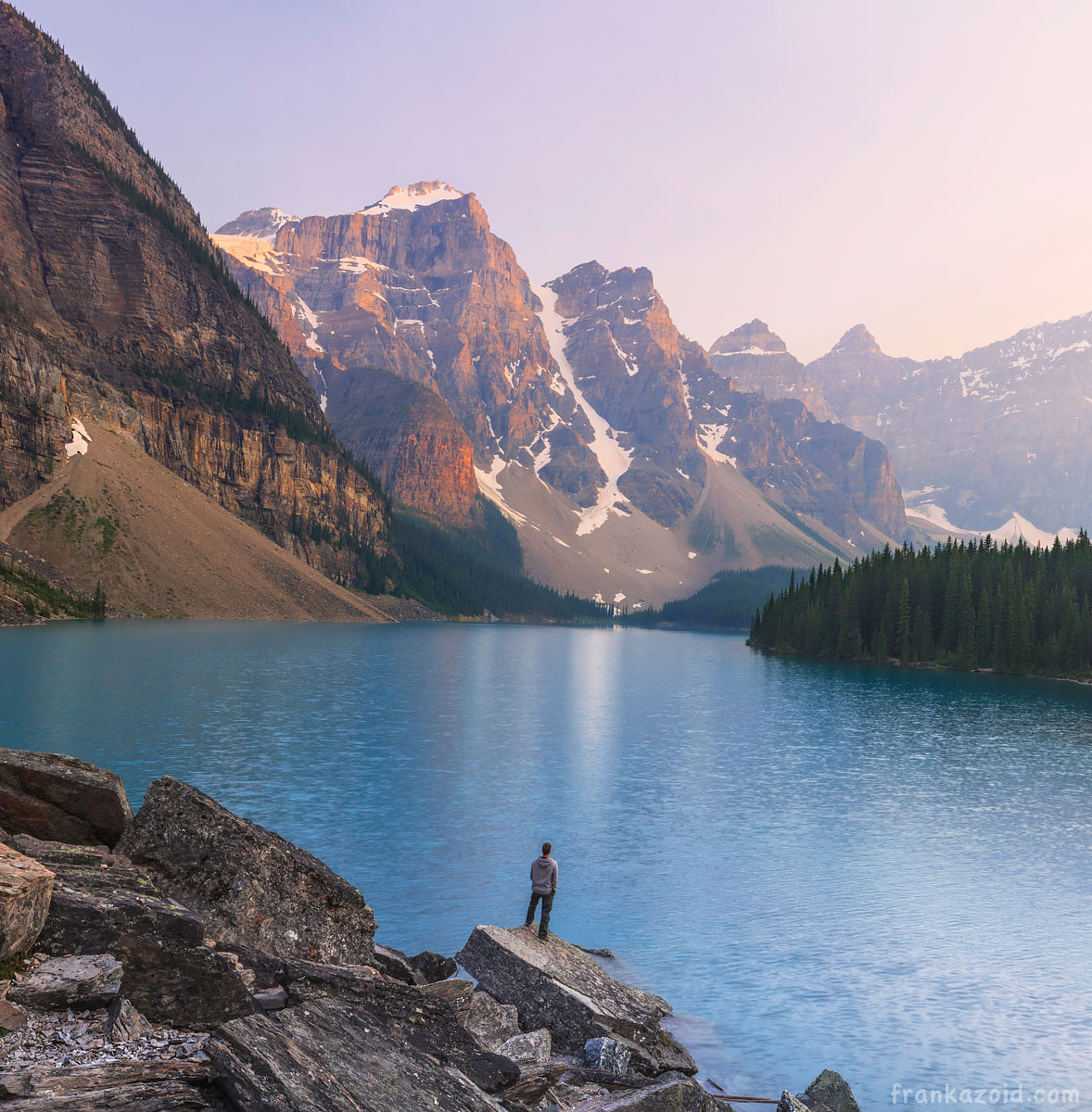 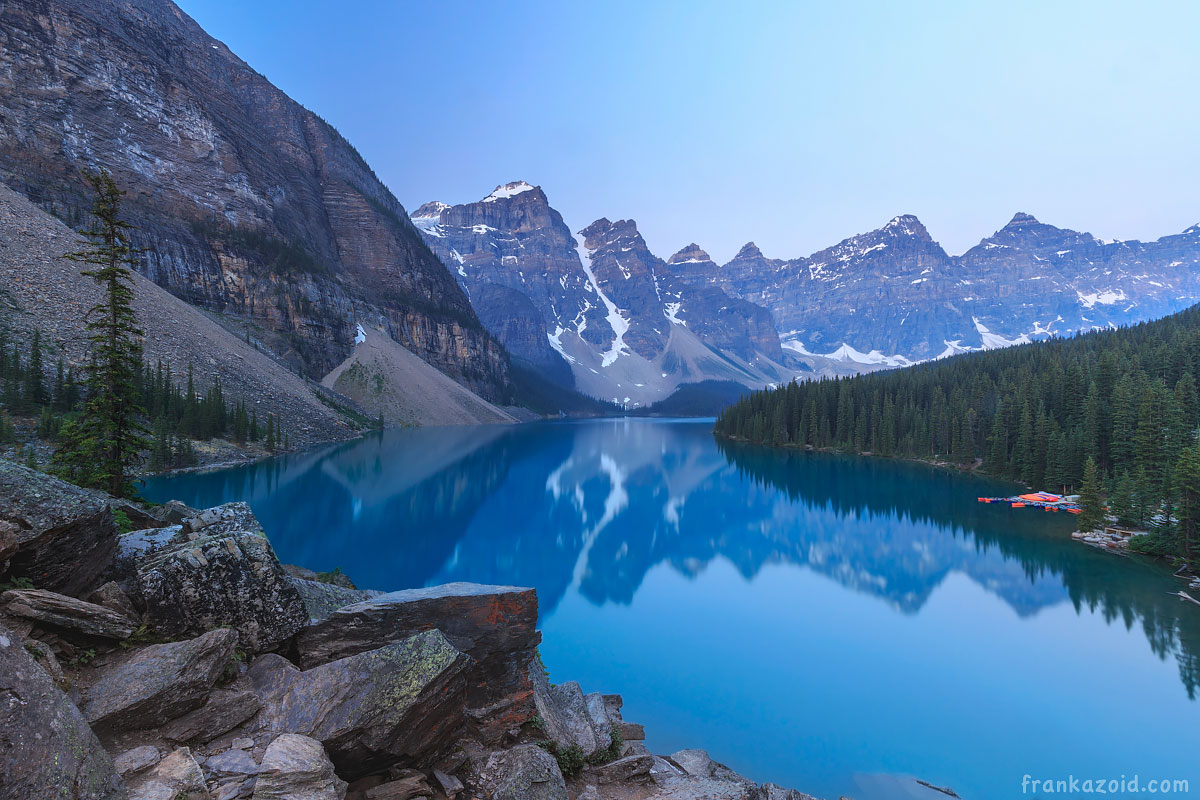 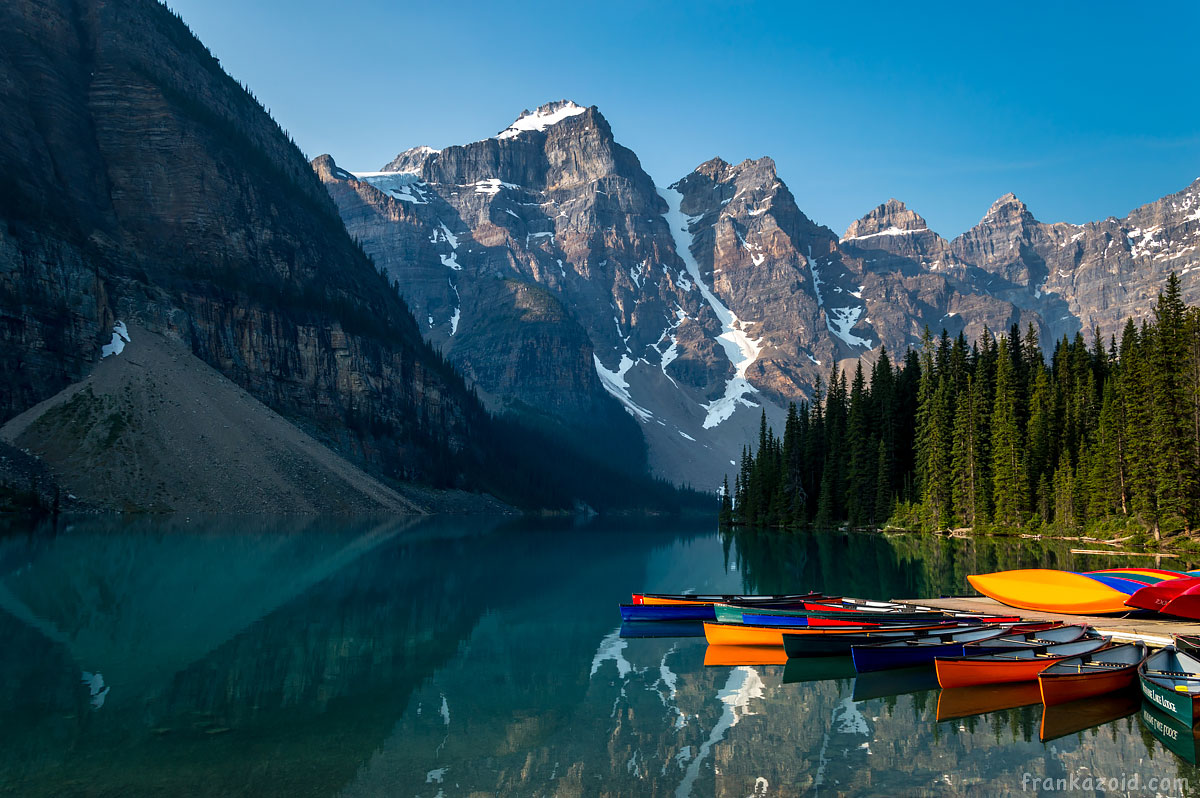 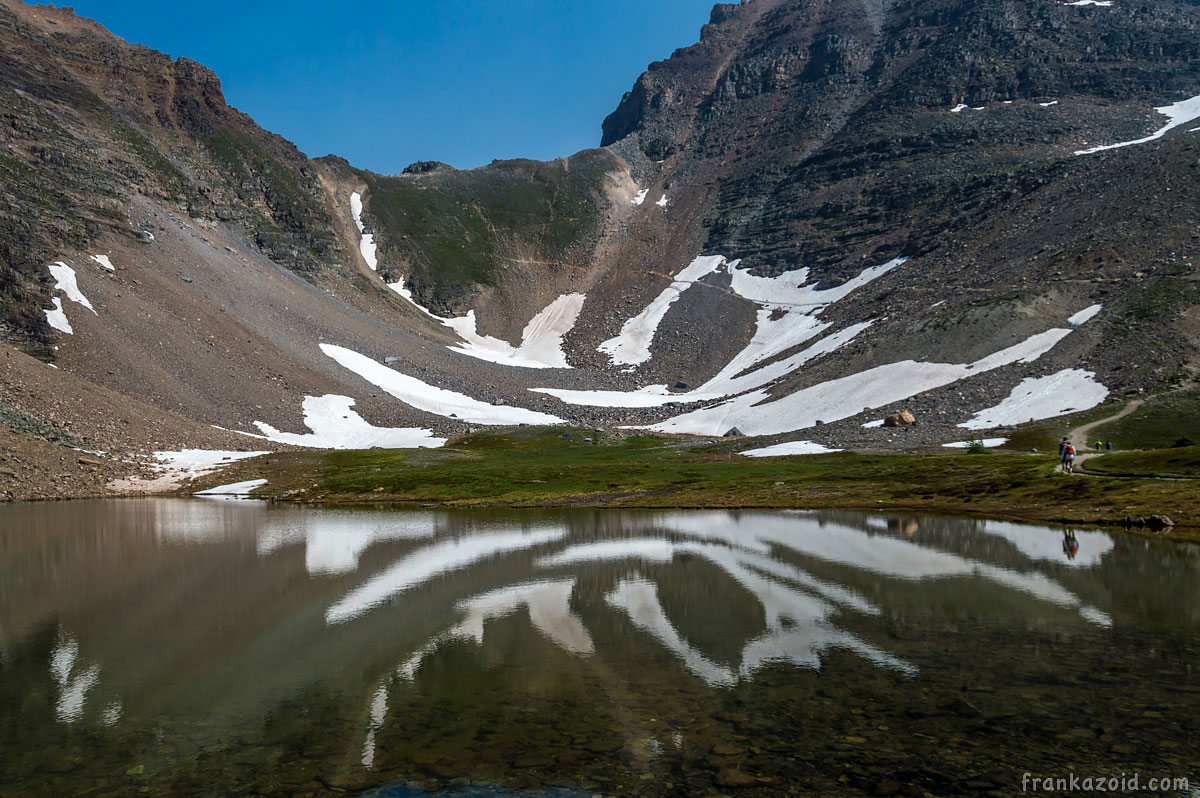 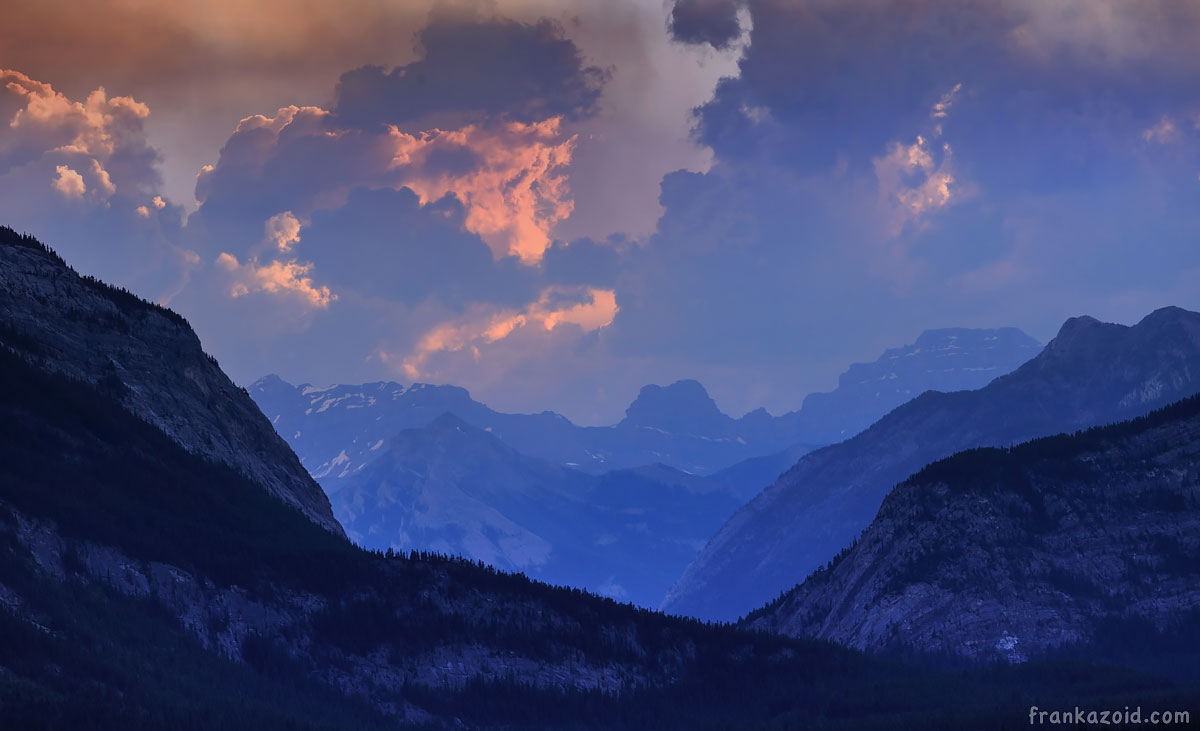 We also made several attempts to enjoy Banff NP but something was in our way – the road was either completely closed, or closed for large buses, or you couldn’t breathe from the smoke. Frustrated, we made a plan to go further and hopefully see the beauty on the way back from Alaska. Bears graze along the roads without worrying, and the weather ahead is such that there is no much hope that it will be better there:) 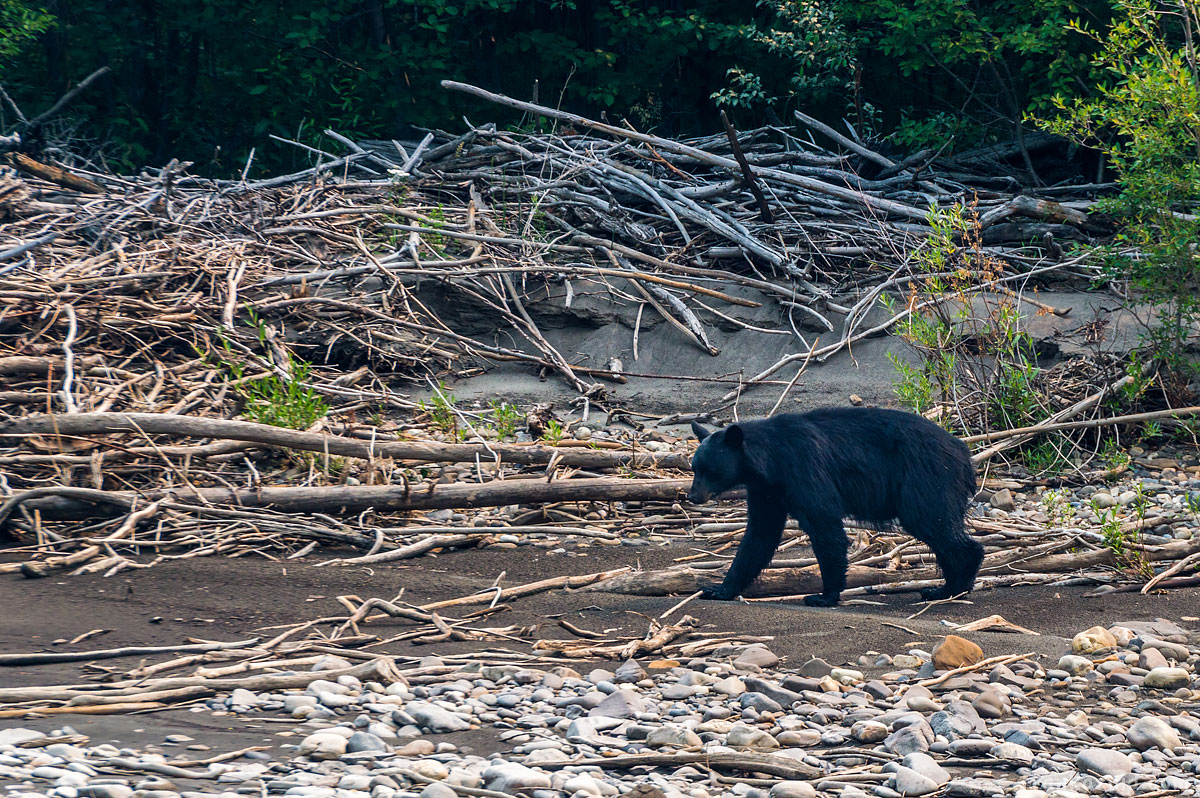 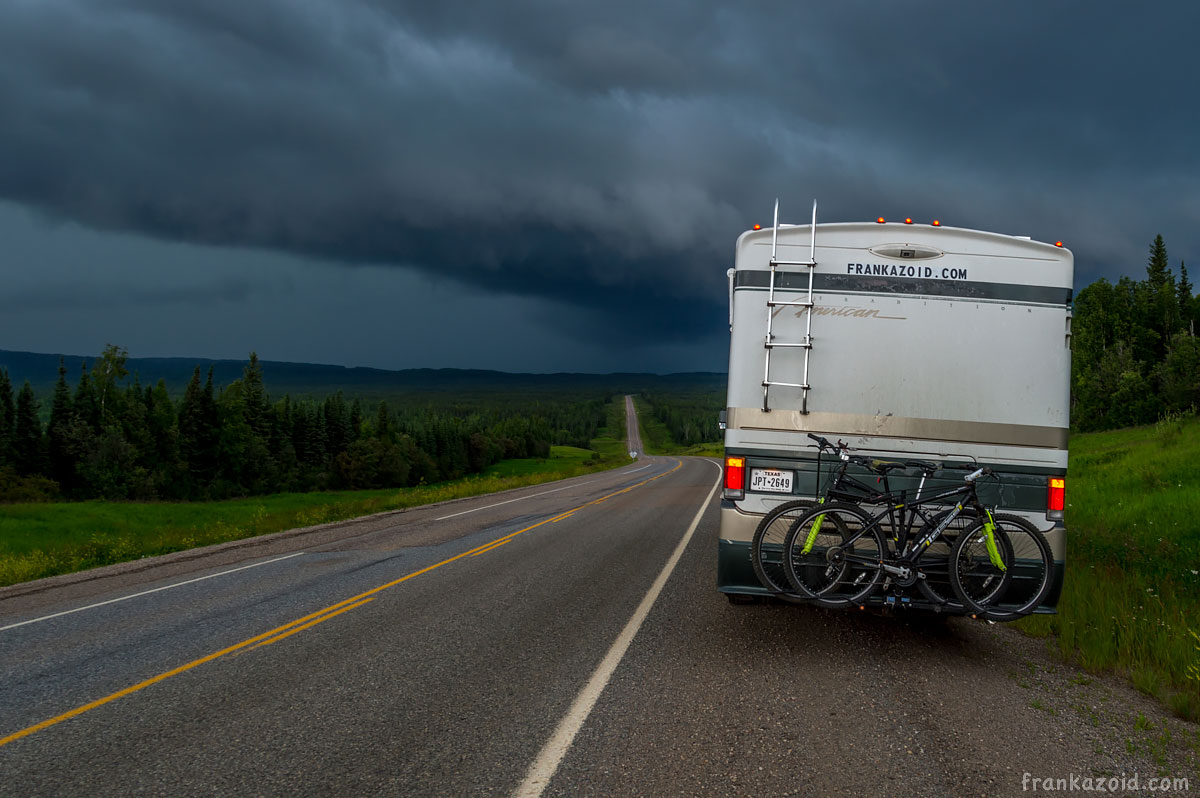